I know I don’t blog about Roo so much and I tend to focus on Flo, but his time will come. Believe me. There’s just so much to talk about with him currently that my fingers would be reduced to stubs from typing for so long. I prefer to discuss this particular wrecking ball over a glass of something alcoholic with somebody offering occasional sympathetic nods.

I digress. My little girl turns four next month. She’s not as little as I like to think and make out that she is. Flo has realised what it takes to be cool at nursery, and every day I feel like I’m losing a little bit of the baby she was.

“I’m going to call you Mum from now on.”

“No. When I was younger, I called you Mummy. Now you are Mum.”

I feel like I’ve had to step up to the mark more than ever this past year. She’s watching everything I do. She is downloading information from my body language, absorbing words that I say and figuring out how to put them into her own context. She’s watching how I react to situations and mirroring them when she encounters them for herself. It is, quite frankly, terrifying.

It’s a level of responsibility that I never thought I would encounter so soon. I think it’s slightly naive of me to think this in hindsight, but in my eyes she’s not three-nearly-four; Flo is my baby. In my mind, she’s still a chubby little kid with a cute fringe that can barely count to ten. And then she walks into the room; bangs grown out, legs that look too long for her body and is counting to 30. In French. Whut.

The stepping up to the mark has had to come in the form of loving myself just that teensy bit more. I’ve had to have more faith in my decisions and stand by them. I have had to go about my day with the conviction that the path I am taking is the right one to wander down. I put myself down a lot and I always have – self-deprecation gets you places; people think you’re funny. However, having confidence in yourself gets you to the right places. The places that were waiting just around the corner for you but you were looking too far past to even take them into consideration.

It hasn’t been easy and I am trying my hardest to take any and all compliments well. The bad thing is that I am always looking for a loophole in what somebody is saying; I’m always waiting for the backhand, the ‘but’ or ‘although’ or ‘however’, or at least the comparison. But I’m surrounding myself with people who don’t offer that option. I’ve got friends who have fought my corner (hard!), and it’s not against anyone else but myself. They’re fighting to get me to see myself for how they see me.

And so I’m taking what they’re saying into consideration. There are no negatives, only constructive positives. That is what I want for my daughter. I don’t want her to view herself as being dependent, as being a failure, as being not pretty enough.  I do not want her to think that she is any less than the amazing little being that she is, but I understand that that has to start with me.

The result? I have a little girl who chastises me for thinking that I am anything less than what I am. She tells me that she is smart, she is funny, she is kind. She makes a point of rolling her eyes and smiling when her brother copies her and explains that it’s because she is such a good teacher that he is doing so. She describes her friends and family as if she were writing an ad for them. If she has to put something down, she gives a reason to balance it back up again (e.g. the kitten scratched her but it’s okay because he’s just a cheeky little cat trying to have fun and he’s only a baby, he doesn’t know any better!). 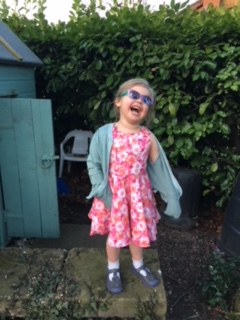 I'm Liz. UK based. Piano playing, dog-loving, choral-singing mother of 2 who doesn't know what she wants from life, truth be told.